In 2011, a stately 1926 colonial home in Flint caught the attention of Diana Phillips and her husband, Allan Griggs. But it had been abandoned for years and needed work.

“We watched it sit on the market for six months and finally bought it,” said Diana, an Ohio native who has taught physical chemistry at Kettering University since 1990. “Then we wondered what to do with it.”

An avid collector, Diana remodeled the house with Allan while picking up unique pieces that inspired literary themes. An upright dresser with a kitschy covered wagon sits in the Robbers’ Roost bedroom. A high-backed red velvet chair beckons in the Canterbury Tales bedroom. A statue of Cyrano de Bergerac hides in a hallway nook.

When did you become interested in running a B&B?

Back in the mid-90s, my late husband and I took a course in B&B operations. After he was diagnosed with heart disease and we visited Cleveland Clinic for his appointments, I kept thinking how a B&B would have been a welcome respite. I planned to open one with a colleague five years ago, but plans fell through.

You’re a physical chemistry professor and Allan is a retired mechanical engineer. Those don’t seem like typical backgrounds for bed & breakfast owners.

We like people, and we work well together. And we have always worked in the hospitality industry. I was a waitress at 21, and Allan cooked and managed cabin rentals through his store after his engineering career. Plus, we’ve traveled everywhere and learned what we liked, which helped us set up this B&B. We’re also both Certified Tourism Ambassadors through the Flint & Genesee Convention & Visitors Bureau.

You and Allan have been all over. Why did you decide to open your business in Flint? 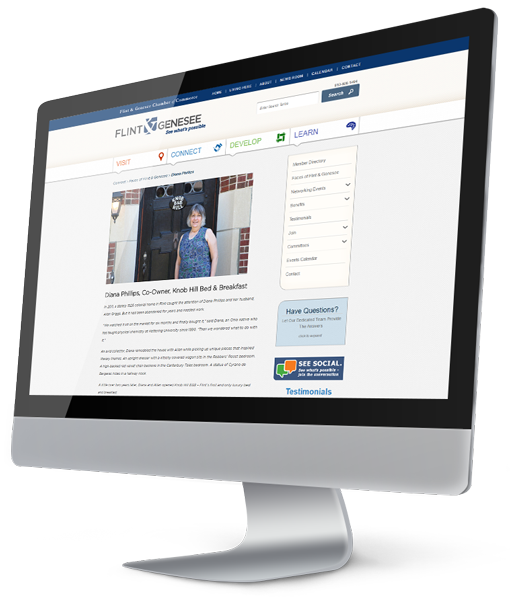 Who stays at your B&B?

Everyone – visiting professors, international travelers and Genesee County residents celebrating an event. Lately, we have had reporters covering the water crisis and President Obama’s visit.

Speaking of, has the water crisis impacted your business?

It didn’t help – we can’t hang a sign saying our water is safe since most people make reservations remotely. That said, our water has been tested, and we’re fine. And since water flavors vary so much, we’ve always used bottled water for drinking and cooking. Because even though you may think you have the best tasting water, other people might not agree with you.

What have you learned about business ownership over the past three years?

Do you patronize any Flint and Genesee businesses?

We sometimes shop at the Flint Farmers’ Market for breakfast ingredients. Almost all of our furniture was locally sourced, especially from Carriage Town Antique Center. And all of our renovation projects employed Flint labor. We had fabulous plumbers, electricians, painters and carpet layers.

We get busier every month, so we’re thinking about finishing off two more bedrooms in addition to our six. We will convert our garage into an ADA-compliant, “20,000 Leagues Under the Sea” room in steam punk décor. And we will turn the attic into a Sherlock Holmes suite, also in steam punk. We’re excited that these additions will accommodate those who are mobility challenged, as well young adults.